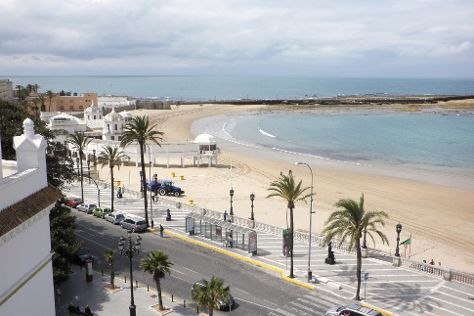 ©
Cádiz is a city and port in southwestern Spain. Start off your visit on the 20th (Tue): make a trip to Playa Victoria, visit Teatro del Titere La Tia Norica's, take an in-depth tour of Yacimiento Arqueologico Gadir, make a trip to Torre Tavira, then kick back and relax at La Caleta Beach, and finally pause for some serene contemplation at Catedral de Cadiz.

For more things to do, photos, where to stay, and tourist information, read our Cadiz trip itinerary planning tool.

Use the Route module to find suitable travel options from your home destination to Cadiz. In August in Cadiz, expect temperatures between 34°C during the day and 24°C at night. Finish your sightseeing early on the 20th (Tue) to allow enough time to drive to Granada.
more less

Things to do in Cadiz

Granada boasts numerous well-preserved examples of exquisite Moorish architecture, not the least of which is the Alhambra, an ancient citadel and royal palace.

Your day by day itinerary now includes Nasrid Palaces as well as Science Park (Parque de las Ciencias). On the 21st (Wed), engage your brain at Science Park (Parque de las Ciencias), pause for some photo ops at La Dorada 1a - Barco de Chanquete, and then take in panoramic vistas at Balcony of Europe. Get ready for a full day of sightseeing on the 22nd (Thu): appreciate the extensive heritage of Mirador de San Nicolas, then admire the natural beauty at Generalife, and then admire the striking features of Alhambra.

For more things to do, traveler tips, where to stay, and more tourist information, refer to the Granada online road trip planner.

Traveling by car from Cadiz to Granada takes 4 hours. Alternatively, you can take a train; or take a bus. Expect somewhat warmer weather when traveling from Cadiz in August: highs in Granada hover around 39°C, while lows dip to 22°C. Wrap up your sightseeing by early afternoon on the 23rd (Fri) to allow time for the car ride back home.
more less

Things to do in Granada

Nerja
Find places to stay Aug 20 — 23:
Hotels on TripAdvisor
Homes on Airbnb
Highlights from your plan